The evolution of performance management In the early nineteenth century, a British entrepreneur named Robert Owen introduced what could be identified as one of the earliest iterations of traditional performance management. In his textile factory in Scotland, supervisors assigned each factory worker a coloured block based on their performance that day. The idea was that high achievers were rewarded and those who needed to improve could do so.

While it has become more nuanced with time, the same traditional practices exist in many modern workplaces today. We may have moved away from manual labour and into a knowledge-based society, but at its essence, performance of employees is still managed by their superiors, with high performers rewarded with a bonus. This begs the question – if the modern world of work has changed, why hasn’t the performance review?

In 2018, a survey commissioned by Ruddington-based HR firm, MHR revealed that 39% of British workers believed the process was ‘pointless’ and ‘time consuming’.1 What’s more, research conducted by Deloitte found that 91% of companies still follow an annual – or less frequent – salary review system, but only 21% would suggest their programme to others.2

With big names such as Adobe, Microsoft, Deloitte and Accenture scrapping the performance review altogether and corporate thought-leaders agreeing that there is something flawed with their operations, is it time for businesses to seriously consider what value their existing performance management processes bring?

For Matt Handford, Senior Vice President of People at Hootsuite, scrapping the annual review was driven by a number of elements.

“We found it was hard to assign ROI to the amount of time being invested in performance management systems. There was a lot of bureaucracy and time spent getting 100% of our employees and leaders to look at themselves through a structure of forms and checklists, and eventually assign themselves a rating,” he says.

“The rating tends to detract from hearing the feedback, and the ability to actually grow and build skill. So we essentially had a process that was taking up a lot of time and was hard to understand. Not only was it not additive, but it was also potentially distracting”

In looking to transform their processes, there were two areas in which Matt and his team identified the most value: “In our case, we chose to focus on conversation, connection and alignment, and development. Because we chose to focus on these areas, we didn’t worry as much about evaluation, capability, long-term assessment and the types of things that allow bias to roll in”

“With the new process, we benefit from the cultural, connective and managerial dialogue that we were aiming for.”

Hootsuite’s Cadence programme can be broken into two parts: the first is to foster simple, employee-driven, 1:1 conversations with direct managers and the second is to encourage an employee-led and employee-driven conversation on developing and growing capability, from short-term job-specific skill development to career mapping and planning.

“We’re a fast technology business, built on innovation, with a demanding, highly educated, highly marketable workforce that moves at the speed of social media. Therefore, it’s counter-productive to spend a ton of time trying to think about 8-12-month individual goals in the strictest sense,” says Matt.

“What is most valuable is having what we call ‘priorities’. Priorities are going to change, they are going to rock and roll probably week-to-week or month-to-month in some cases in a business like ours,” he continues.

“So we provide a really simple framework, which the employee drives and owns and has the accountability to say ‘here are my top five’ for this week and then their manager just keeps checking in. That becomes the basis of that weekly conversation.”

The second part of Cadence occurs as and when required – usually once a month or once every two months – and covers wider progression, growth and learning.

“The fundamentals in our culture that we see as differentiators and we see as encouraging success are all about the ability to build and develop capability at very high speed,” explains Matt.

“Our employees have high expectations of themselves, the organisation and how quickly they’re going to move through learning and progression in their career, so our performance management system needs to reflect that.” The results are in

Two years into implementation, and the company is now scoring an 80% positive response on the question Are you having 1:1 meetings on a weekly or bi-weekly basis with your leader? in their annual employment survey. This emphasis on consistent conversations has seen employee alignment improve significantly around performance management.

“In our employee survey, one of the highest scores we receive is in response to the question ‘I understand how my work connects to the ultimate goals of the organisation.’ This question is one of our top 10 highest-rated questions, with 85% to 95% of people responding positively,” says Matt.

“We’re 1000 people, across a dozen countries. We’re way beyond the start-up challenge of having individuals aligned.”

The next challenge is making sure those conversations are as effective as possible.

“We want to make sure that the current conversations are as useful and valuable as they can be, so we’re trying to build that skill in the organisation,” explains Matt.

With the removal of ratings, the idea of consistency is also an ongoing challenge for the Hootsuite team.

“It’s very difficult to ensure that you’re having a consistent way that people’s performance is being reviewed. We’re trying to create a rubric for a structure – how do we incorporate a uniform, unconscious-bias-proofed structure that allows the experience of the 1:1s and the Cadence programme to stay consistent?” Matt explains.

For those starting to move away from the traditional performance management processes, Matt suggests changing your thinking: “If people did the math, they’d see that usually performance management is up there in the top five investments you’re making in your business, but we don’t tend to think about it that way.” “So I would start by trying to think about the process cost and the drag on the organisation, as it frames the scale of a challenge.”

Once you’re clear on the opportunity cost implications, it’s about finding simple solutions that make the process more efficient, and by proxy, adding business value. In doing this, Matt cautions against looking first to complex technology and instead analyzing the business value drivers that you’re trying to hit. At the end of the day, modern performance management offers an opportunity to pull together a high-performing team in a meaningful way, creating community, alignment and dialogue. Whatever your end solution looks like, it is these drivers that should stay front of mind.

No time to have one-to-one meetings? Perhaps it’s time to hire an executive assistant! As a specialist recruitment agency, Tiger can help – get in touch today! 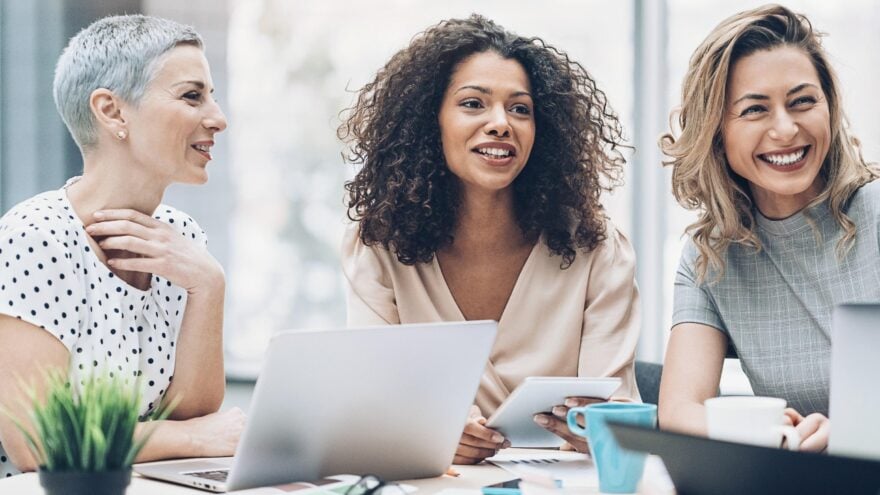 At Tiger, we feel very lucky that our management team is made up, for the most part, of strong women! However, we know this isn’t the norm and, according to…